The Wisdom of Writing Character Profiles

The Wisdom of Writing Character Profiles

Using a computer program designed for writing fiction gives me an opportunity to write detailed profiles of each of my novel’s characters. Those profiles are stowed neatly in an area at the bottom of my writing page for easy access, and that area operates independently of other parts of the screen. A selection of given names and family names resides in this area as well, so I have no excuse for failing to take advantage of these handy resources. 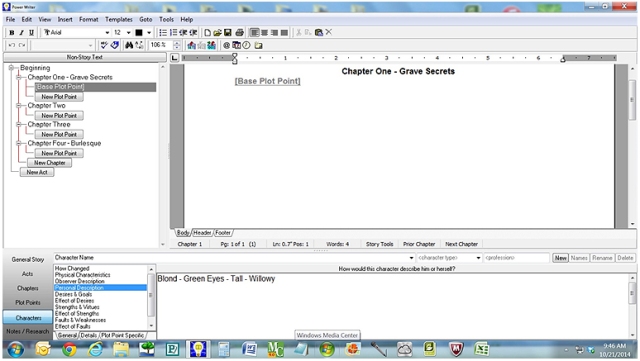 After writing four novels, three of them using the above-mentioned software, I’m presently committed to doing a better job of keeping track of my characters. The value of keeping a detailed log of characters for reference became clear to me long ago, but I’m guilty of what I choose to call “creating characters on the run.” I excuse myself with the rationale that stopping to write a profile interrupts the flow of the writing. Who wants to interrupt when the muse speaks? Not I! I don’t want to take a chance that the elusive muse will get angry and give me the silent treatment. Nevertheless, I think I’ve learned at least two lessons sound enough to risk upsetting the muse.

Lesson #1 Learned: Keeping Track of the Characters in a Series

Writers have vivid imaginations that let them visualize characters in the mind’s eye. In my

experience, the protagonist tends to be the easiest to imagine. For instance, I see my main character as this tall, willowy blond woman with intelligent green eyes. I know her well and pull details from my memory when I need to write something about her. However, there are facts I definitely don’t remember or never took the time to decide in the first place. The picture in my head serves me well until I need to know something specific, like the exact date she was born. Perhaps I’ve never needed to know this in the past, but then a scene in the story involves a discussion about horoscopes. I stop and look back through the other books I’ve written in the series. Is there a place where an actual birth date appears in the writing? How upset is the muse now? I’d say much more upset than if all I had to do was look at the character profile I should have written at the bottom of the page.

Anticipating that I might want to use a minor character in my story more prominently in subsequent novels in the series never occurred to me until it happened. The muse became exceedingly upset when the flow of the writing absolutely stagnated while I researched exactly which personal details I’d included about this insignificant character in the earlier books, a character who now had a major role in the storyline. If only those details resided at the bottom of my planning page, all nicely divided into categories such as: how changed, physical characteristics, observer description, personal description, desires and goals, effects of desires, strengths and virtues, effect of strengths, faults and weaknesses, effects of faults, what is learned.

Whew! Those categories could keep me writing for days without making any visible progress on the novel! Of course, a writer doesn’t use all the categories all the time. However, I figure the more detailed I can make a profile, the easier it will be to reference a character’s pedigree and then move on with a happy muse. It’s far too easy for me to name a character and move on quickly than to figure out all the bonuses and baggage he or she might have to offer in future narratives.

As stated at the beginning of this post, I think I’ve learned these lessons well. When I begin writing the fourth novel in the series, perhaps there’s a chance I won’t find my muse yawning on the back porch while I rack my brain trying to remember how I visualized a character the first time I wrote about her. I can only hope!

C.K. Thomas lives in Phoenix, Arizona. Before retiring, she worked for Phoenix

Newspapers while raising three children and later as communications editor for a large United Methodist Church. The Storm Women is her fourth novel and the third in the Arrowstar series about adventurous women of the desert Southwest. Follow her blog: We-Tired and Writing Blog.

4 Responses to The Wisdom of Writing Character Profiles