The Grimm Alcove of Stony Mountain and the Dog Attack

The Grimm Alcove of Stony Mountain and the Dog Attack

The walk through Stony Mountain at dusk along the ridge is a walk of serenity bounded by uncertainty. Steep rocks, slippery slopes, spiny plants, snakes, and scorpions contrast with songbirds, trees, flowers, cottontail bunnies, the smell of creosote, and a demanding uplifting circulation-enhancing meditative climb. Beautiful and quiet, hiking just before it’s too dark. A fiery sunset over a mountain silhouette frames the city lights that twinkle like Christmas. Any phase moon is a cherry on top. Occasionally and in certain areas, there’s a small sense of danger – like a Grimms’ Fairy Tale when the forest commute goes bad.

There is a dry drainage with a sea of yellow-flowered brittlebush and a sandy bottom with a palo verde alcove enveloping the crossing. It would be the perfect place to live if a bandit 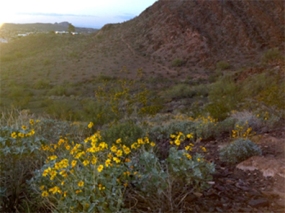 needed a temporary hideout home. In the waning light, it’s beautiful and scary in a Grimm sort of way.

One darkish dusk, to avoid the alcove, a new lower trail seemed like a nice walk through the desert toward home. After finding and following a faint trail under the last pretty light, two large barking dogs with no collars surrounded, as if to attack, chilling the bones. A stern NO! BAD DOG! and the dogs fell back – barking, lurking. It seemed safe to proceed – until the dogs lost their fear and rushed. Unexpected and scary.

Reaching for the phone, the closest lunge yet only six inches away, resulted in the unintended verbal request “Help me.”

The effect was immediate. The dogs stopped barking, backed off, and watched closely and calmly from a nearby rise. They did not bark again.

Deborah Tosline is putting the final touches on her soon-to-be-published book, Skin Remodeling DIY: An Introduction to the Underground World of DIY Skin Care. Learn how to have your best skin using easy and effective methods. Deborah hikes the wilderness during dusky light reminding her of the classic Grimm’s Fairy Tales that she read as a child.