For my recently released novel, Chasm Creek, I pitched to a small press and was offered a contract. The contract stated that I would be responsible for marketing and promotion. 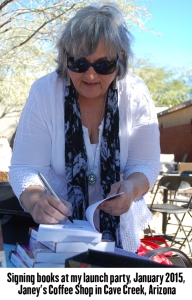 More than six months before the book was released, I did all the advised activities: I attained cover blurbs from well-known authors; I created a website; I started a blog; I opened a separate Facebook page as an author; I joined a multitude of groups on Facebook that would be populated by people most likely to buy my book; I opened a Pinterest account; I began creating an e-mail list. I joined the Phoenix Publishing/Promotion Meet-Up group. Since my book release, I’ve had a well-attended book launch party and distributed more than 20 copies for promotional, review, and contest purposes. I post often on as many as 42 groups on Facebook.

What has been the result of all my efforts? If Author Central is accurate, a total of 14 books sold on Amazon since October 2014. My own personal efforts have resulted in about 80 sales. 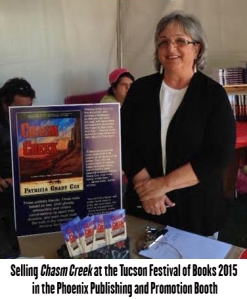 participating in the events Laura arranges for us. My goal (dream?) is to sell 2,000 copies. I know that won’t happen overnight; however, I am coming to the realization that, for several reasons, the small press avenue is something to be considered very carefully. It’s not necessarily the best way to go.

If you are offered a contract by a small press, you should be happy about it. It might be the best thing that ever happens to you. But you really need to do your research. What can they offer you that you can’t do yourself? Who will you be working with – will you be compatible? Contact other authors who used that publisher. Make sure the publisher is willing to promote your work, too (sending out review copies, buying advertisements, arranging your participation on panels and in book festivals).

If you’ve discussed all of the above with a prospective small press but remain less than 100% sure that a small press is right for you, and you have great confidence in your abilities, put your efforts into self-publishing. Attending the Phoenix Publishing and Promotion Meetup group will help you along the way.

the West. Her nonfiction work has appeared in magazines, newspapers, and ghost-written memoirs. Patricia has volunteered at the Pioneer Arizona Living History Museum where she experienced, first-hand, the realities of life in the 1800s. Her love of the Southwest – the landscape, the history, the culture – infuses her work with authenticity. Originally from Rhode Island, she moved to Arizona 24 years ago and currently lives in Phoenix. Her debut novel, Chasm Creek, is currently available on Amazon or visit her website. Patricia blogs monthly at Patricia Grady Cox, Writer.

4 Responses to Self-Publishing vs Small Press