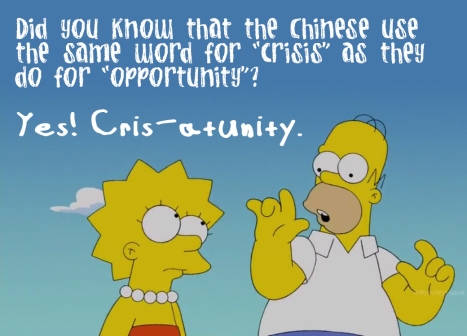 While editing an article, I needed to research the author’s use of the old saying that the Chinese characters for “danger” and “opportunity” combine to form the ideogram “crisis.” (I initially thought the writer had the equation mixed up, so I needed to double-check.) As it turns out, this well-worn phrase, which John F. Kennedy popularized and serves as a key tenet for more than a few motivational speaker/self-help empires, is to Far Eastern wisdom as Panda Express is to Asian cuisine:

Lisa: Look on the bright side, Dad. Did you know that the Chinese use the same word for “crisis” as they do for “opportunity”?

I suggested to the author that he not use the expression, but he kept it in. It’s something editors frequently have to address: What’s your responsibility to the writer of an article containing a little nugget of popular-but-false wisdom? If you’re a writer: Have you ever discovered that one of your favorite figures of speech was flawed?

A freelance corporate copywriter and editor since 1999, Jake “Dr. Freelance” Poinier is the author of several books, including The Science, Art and Voodoo of Freelance Pricing and Getting Paid. His publishing company, More Cowbell Books, recently published Juggling on a High Wire: The Art of Work-Life Balance When You’re Self-Employed, by Laura Poole.