Okay, you might be asking what mashed potatoes and boobs have in common, right? Well, for me, it’s the day women around the world dread for 364 days out of each and every year – and dread it they should! Oh hell, that’s not quite what I mean. It’s something they should be doing every year. It’s just a dreadful thing to do. Well, it’s actually a good thing.

Cut to the chase? 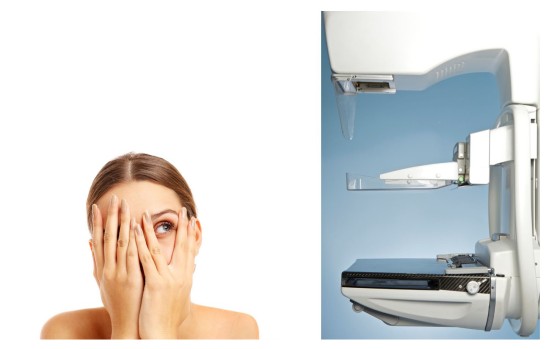 Okay, I’m talking about Mammo-Day – the day I’m scheduled for my yearly mammogram. The big M, the dreaded vice, a modern day torture device equivalent to the medieval torture device called the “boot,” which was designed to squeeze hard enough to cause crushing injuries to the leg or foot. I am thoroughly convinced the man who invented the mammogram device had a deep-seated hatred for the opposite sex and a lot of training in torture device design.

Think about it, people! Only a man who hates women would create a device like that. If a woman had designed the mammogram device, it would be cushy and pink (or purple). You would be able to sit in a recliner while it gently massaged your boobs, snapping pictures as it went, and running warm water over your feet to keep you relaxed. It would have a mirror on the front for you to refresh your lipstick, and you could get an iced venti 7-pump quad-shot skinny vanilla latte in the little compartment on the side of the pretty pink machine with the glossy finish.

But nooo…instead, we get a cold, chrome monster that can morph like a transformer into whatever position will inflict the maximum amount of pain. You are forced to stand at an impossible angle with your boob pointed left and right, your feet pointed straight ahead, your chin pointed toward the ceiling, your shoulder hanging limp at your side, and one hand maniacally clutching a handle the nice man has conveniently provided. Thank you, Mister Inquisitor! And you get to do all this while the nice nurse smiles as she gropes your boob, squishes it, lifts it, rolls it into a flippin’ ball, flattens it like an apple pie crust, and then pushes the damn button that drops another ice-cold plate down on it like a falling elevator full of concrete.

It takes super-human strength not to shriek as your boob is squashed like a slow-moving armadillo in the middle of the highway. You hang onto the damn machine like it’s a freaking life preserver and taste blood as you try not to chew your tongue off. And all the while, the transformer is squeezing your left tit so hard that the blood shoots backward, up into your brain. Blood is not supposed to run through a vein in both directions, people! The whirlpool effect it creates makes you feel like you’re about to pass out, which is most likely by design because it’s the only way they can get you to hang on to that friggin’ machine.

Now, it might be tolerable if they only did this once…or even twice. I would understand. I do, after all, have two breasts. But oh, noooo! They gotta take three or four runs at each side. Gotta get a good, clear view. Of what? My armpit? My collarbone? My intestines? Because they are ALL squished into that stinking torture device right along with my poor throbbing ta-ta. The whole test takes maybe 20 minutes, but I then spend the next 364 days cursing the nice nurse, reclaiming my dignity, swearing I’ll cut the balls off the next doctor who asks me do it again, and ratcheting up the courage to finally admit defeat and schedule another appointment.

And as if that isn’t bad enough…apparently, it’s important for them to keep track of your nipples during this torture session. They claim they have to know where the nipple is at all times because it can create shadows on the image that can be misinterpreted. So the nice nurse with the smile whom you now want to punch explains that the breast can roll and place the nipple in awkward positions during the test. More awkward than the positions she’s putting my nipple in? Is that even possible? Well, lady, I can tell ya just exactly how that happens!!! Anyway, she insists they have to keep track of it – hence, the cold metal BB they tape dead-center onto each nipple. Thank God, I only have two!

So, finally the test is over and I’ve survived. It’s time to dress and go home to self-medicate with alcohol. The nice nurse with the smile that just pisses me off says, “Oh, honey, don’t forget to remove the BB’s before you put on your bra.” What? Crap! She put them on there with industrial strength tape. Now I’m expected to peel them off?

There’s no soothing solution I can use to soak them off? This is not going to be pretty!

I sit in the dressing room, naked to the waist, staring down at my nipples and building up the courage to rip off a BB. Would it really be that uncomfortable to just wear them until they slough off by themselves? My luck, I’d forget and end up in jail when I set off the metal detectors on my next trip through airport security. There’s a Kodak moment for ya! I finally decide I can do it. I’ve had a baby, right? I can pull tape off my nipples. So I take a deep breath, get a good grip on the edge of the tape, and yank real fast…like mom taught you to do with stuck-on Band-Aids.

Now I’m panting, trying to pull breath into lungs that have slammed shut from the pain. I cannot even begin to tell you how grateful I am that I don’t have hair on my nipples! Although, if I did, it might be a good way to get insurance to cover the cost of a good waxing.

So what I’ve discovered this time around is that, apparently, there was an issue in the past with the little metal BB’s not staying in place – because some jackass has gone and improved the damn adhesive. And when I find that S-O-B, I’m gonna beat him to death with my purse. Aw crap! I still have one nipple to go.

Okay, long story short – I got the other BB ripped off along with about a half pound of sensitive tissue, got my clothes on, and fled that stinking torture chamber like someone had set fire to my ass!

Ya know, I remember commenting to the nice nurse with the mean smile, as she was grinding my right boob into the cold machine, that if men had to take this test, they’d quickly invent a more user-friendly contraption.

She laughed and said, “Well, you know, some men do get breast cancer. We occasionally have to put their breasts in this machine too.”

I stared at her wondering if her last brain cell was squeezed into that torture device right along with my throbbing boob. Men’s breasts? Are ya kiddin’ me? She missed my point entirely. Oh, hell no! I had other body parts in mind. Now let’s see them stand on their tiptoes, touch their nose with their foot, cough, squeeze their cheeks together, and try not to pass out while that damn machine is squeezing the ever-lovin’ life out of the baby-maker!

Kayce Lassiter is a second-generation Arizonan, born to deaf parents. She learned to dream, imagine, and pretend to dispel the loneliness of growing up on a farm – something she’s never outgrown. Kayce still lives in rural Arizona with horses, dogs, and a very confused rat-killing duck. Find Kayce at: KayceLassiter.com.