I stared in exasperation at what everyone called “the small saddle.” Small or not, hoisting it to

Betsy’s back was beyond my abilities at age eight. Betsy, half-Shetland and half-ornery horse, glanced at me over her shoulder.

“Told you so,” she whickered.

Our two horses were not only family pets, but provided entertainment and minor adventure. We lived ten miles from a town of about 2,500 in the Colorado Rockies. No kids lived nearby and improvising things to do made up a good portion of a summer day.

The horses allowed us to climb the hill behind our house, hang out by the river talking to tourists, or imagine being in a big Western movie. I could get far enough away from the house to sing at the top of my lungs, and often did.

All I could do was heave a sigh of resignation.

One day, my dad drove up as usual but didn’t come inside the house right away. Soon he popped his head inside and gestured for me to follow him. In the tack shed, a new saddle rested on a sawhorse. A really little saddle. It looked nothing like the heavy, tooled leather western saddles we had.

“Here, kiddo, you can manage this one by yourself.”

I learned it was an Army saddle he found at the surplus store. A little plaque on the back says 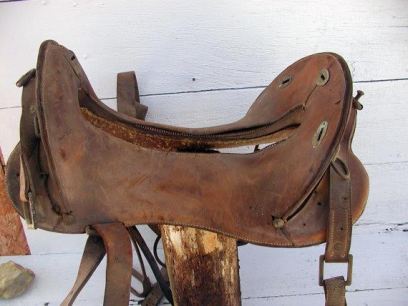 There was a big opening on the seat, but when I asked him if there was something wrong with it, he just said it was fine and didn’t elaborate about the reason for the odd shape.

He was right. I could definitely lift this one myself. I could cinch it up, and knew Betsy’s trick about expanding her lungs so it wasn’t really tight and you might fall off when you put a foot in the stirrup. I was free at last! I enjoyed to the hilt my many rides after that. Betsy resigned herself to being a good companion.

The history of this saddle didn’t interest me much then, but since I’ve learned more. This riding saddle was designed by George McClellan, a career US Army officer, and adopted by the Army in 1859. It has been in use without interruption since then. Army horse cavalry used it until the end of World War II, and it is still used by ceremonial mounted units.

My dad wasn’t a talkative man. Gestures like this conveyed much. I hope I thanked him for his thoughtfulness, but I probably didn’t.

writing as Les Brierfield, and is at work on her next novel and several short stories. A Colorado native, she lives in Arizona with her husband and writing collaborator Eduardo Cervino (E.C. Brierfield). Follow her blog: Les Brierfield, Author. Lesley welcomes contact at lsudders@yahoo.com.