It’s raining cats and dogs! This isn’t unusual here at our summer home in northwestern 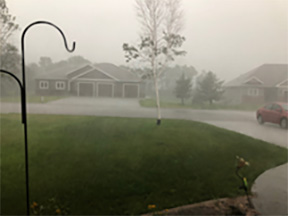 Minnesota, where it rains at least once a week, sometimes all week long. How else would the corn grow so tall, the mosquitos grow so large, and my hair grow so limp? The other question is, why did I state, “It’s raining cats and dogs”? I didn’t really see any animals falling from the sky, yet you knew I’d been observing a torrential rain storm. What are the origins of that curious saying?

The most common explanation for “it’s raining cats and dogs” comes from a time when shelters had thatched roofs. Domestic animals hid in the thatch and would either be washed out in a rainstorm or seek other shelter. The phrase could also be attributed to a 1710 poem by Jonathan Swift, A Description of a City Shower:

Those are pleasant thoughts! Perhaps Swift wrote this poem about another theory. At one time the streets of British towns were so poorly constructed that many cats and dogs would drown whenever there was a storm. The townspeople who observed the corpses floating by thought they had fallen from the sky. Swift later made reference to his city shower poem in A Complete Collection of Polite and Ingenious Conversation, 1738: “I know Sir John will go, though he was sure it would rain cats and dogs…”

I’m a great procrastinator, especially when I have a task to do I don’t know how to do, don’t want to do, or fear I will succeed. Often I procrastinate writing. I convince myself I need to dedicate an entire morning or afternoon to research and write, although Patricia Grady Cox suggests scheduling time to write, even if it’s just an hour a day. That would be ideal, but when my procrastination kicks in, I find my laundry gets washed, the dog gets walked, and Facebook gets perused. I find it difficult to “get down to brass tacks” or “engage with the basic facts or realities” of writing.

The “brass tacks” phrase has been attributed to the haberdashery trade. A yard of material was once measured by holding it out along an arm’s length. In the late 19th century, that habit was discontinued when cloth was measured between brass tacks set into a shop’s counter. This explanation is confirmed in a piece from Ernest Ingersoll’s 1880 story, The Metropolis of the Rocky Mountains:

“I hurried over to Seabright’s. There was a little square counter, heaped with calicoes and other gear, except a small space clear for measuring, with the yards tacked off with brass tacks.”

The older I get, the harder it is for me to draw stored information out of the depths of my mind. This often happens when I’m trying to think of an actor’s name, or even a common word. One time when my husband and I were first married, he was trying to recall the name of a popular comedian. The only way he could evoke the name was to stand in front of the bathroom mirror and perform one of the comedian’s routines. At this moment, I don’t remember who this person was; in other words, I am “racking my brains.”

To rack one’s brains is to strain mentally to recall or to understand something. The rack

was a medieval torture device that tore its victim’s limbs from their body. Another pleasant thought! The term “rack” was later adopted as a verb, meaning to cause pain and anguish. In 1602, Shakespeare used it as a verb in Twelfth Night:

“How haue the houres rack’d, and tortur’d me, Since I haue lost thee?”

The first recorded use of “rack” being applied to brains was in William Beveridge’s Sermons, 1680:

“They rack their brains . . . they hazard their lives for it.”

Not remembering a comedian’s name isn’t hazardous to my life, but being unable to recall common words could be detrimental to my writing career.

As I sit here writing, it’s raining cats and dogs, and the forecast is for rain all day. That will give me all day to get down to brass tacks and complete my blog post. Unfortunately, there will always be that allusive word I will rack my brain to remember.

There are so many other curious sayings. What are some you use? In case you are racking your brain to remember, here is a great website that explains curious sayings, idioms, phrases, and proverbs.

Birds,” they fly away to Minnesota to escape the summer heat – and to fish. While in Minnesota, Barbara became fascinated with its state bird, the Common Loon, and was prompted to write four picture books about Lonnie the Loon, because everyone should know about loons. However, books about loons don’t sell very well in the desert, so she is writing a new series of picture books about Quincy the Quail. Barbara visits elementary schools as a guest author to read her books and share interesting facts about loons and quails. She’s working on other children’s books and a special book about her yellow lab, Larry: Larry’s Words of Wisdom. Learn more about Barbara at RennerWrites.com, as well as on Twitter, Facebook, and GoodReads.