Please note: The opinions in this piece are solely those of the author and do not necessarily reflect the positions of the blog publisher or other contributors to the blog.

Last week, the United States found itself celebrating values, to a degree of festivity I cannot remember previously in my lifetime. With the passing of Sen. John McCain, we were treated to a combination of joyful and tearful remembrances from those who experienced him in many roles: husband, father, workmate, cellmate, Congressional colleague. A feisty Naval Academy cadet, the young McCain preferred parties to performance and said, laughing, that he had graduated fifth from the bottom of his class.

As a Navy flyer during the Vietnam War, he was shot down during his 23rd bombing mission over Hanoi. There ensued more than five years of horrific treatment in the “Hanoi Hilton” prison camp. During his time in captivity, McCain’s stubborn adherence to what was important to him blossomed. He shouted rude taunts to his captors, loudly enough that his cellblock could hear that he was not broken, even while he was being taken for further “interrogation.” McCain was celebrating values he held increasingly dear: be strong, be loyal, encourage others. He would say later that it was in prison in another country he fell in love with his own country. Later, as a public figure for decades, McCain stood for honesty and integrity, kindness and compassion, and helping each reach his or her potential. McCain would have agreed with these words of John Wesley, the Anglican-educated founder of the Methodist Church, celebrating his own values.

In addition to his work on Capitol Hill, McCain wrote a dozen books and the order of service for his own funeral. His final, and perhaps most powerful, expression of celebrating his values, was the design of his funeral week. Raised Episcopalian, perhaps he remembered the pre-communion prayer that asks that “We…serve you in unity, constancy, and peace…” McCain designed his funeral week to be a celebration of positive values and a show of unity by leaders from oposite “sides of the aisle.” He invited positive global influencers to his service and banned the current President of the United States. He asked that two former Presidents, Bush and Obama, give eulogies, and as McCain had asked, they sat together, sharing mints between talks. President Bill Clinton and onetime Presidential candidate Hillary Clinton sat next to them. Even in death, McCain was a powerful unifier, a truly influential leader, causing people to pull together in their shared love of values and of the United States of America. He was The Effective Authorsm of his destiny. 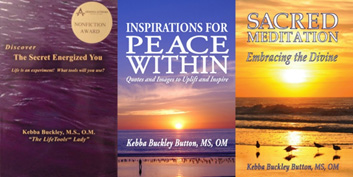 also is an ordained minister whose passion is helping people find their Peace Within. She is the author of the award-winning book, Discover The Secret Energized You, and also Inspirations for Peace Within: Quotes and Images to Uplift and Inspire. IPW is available on Amazon in full-color glossy format. Her newest book is Sacred Meditation: Embracing the Divine, also in full-color. For full-color PDF versions, contact her office. For an appointment or to ask Kebba to speak for your group: calendar@kebba.com.