The Truth About Comicsgate

The Truth About Comicsgate

Please note: The opinions in this piece are those of the author and do not necessarily reflect the positions of the blog publisher or other contributors to the blog.

If you’ve heard about “Comicsgate” in the mainstream news, you may believe it’s a temper tantrum by bigoted comic fans. Because these “man-babies” hate the new diversity of writers, artists, and characters in comics, they resort to online threats and harassment. The problem with this narrative is that it’s demonstrably false.

Comicsgate began as a reaction to the politicization of comics, a trend which peaked with the 2016 election. Many comics industry pros were liberal Democrats who posted angry rants on social media against Trump and the people who voted for him. When Republican fans pushed back, these pros doubled down, saying they didn’t need or want Trump supporters’ business.

In a normal industry, alienating half of one’s audience would be professional suicide, but not in comics publishing. The dominant companies Marvel and DC receive most of their income from movies featuring characters like Spiderman and Batman. These subsidize the print divisions who’ve stayed in business despite slumping sales. The writing staffs became exclusive clubs, hiring writers and artists by political affiliation rather than skill and talent.

This trend inspired comics fan Richard Meyer to start a YouTube channel called “Diversity & Comics.” Diversity, he says, is a good thing. He praises Marvel’s X-Men franchise, which features female, black, and gay superheroes. Yet the new generation of creators seems determined to supplant traditional heroes, for example, replacing Tony Stark’s Iron Man with a black teenage girl. Unlike old-school characters such as Storm or Wonder Woman, the new female heroes have uniformly far-left feminist attitudes. Certainly, we would expect some diversity in personalities as well.

As Marvel and DC promoted political agendas, their products suffered. Instead of non-stop action, characters discussed their feelings for pages on end. Artwork was often sloppy and uninspired. Rather than focusing on quality, editors obsessed with diversifying the staff, preferentially hiring from tiny minorities such as transgenders. If fans didn’t like the result, they blamed racism, sexism, or transphobia. Yet in the Golden Age of comics when the greatest creators were Jewish (Stan Lee, Jack Kirby, and others) there was no anti-Semitic reaction from fans.

Diversity & Comics started a trend, inspiring dozens of fan blogs and YouTube channels, many of them echoing Meyer’s complaints. If Marvel and DC despised their audience, readers would take their money elsewhere. Joining the movement was long-time comics pro Ethan Van Sciver, a former staffer at DC who’d been vilified for voting Republican. He announced the revival of his 1990s indie comic Cyberfrog to the widespread enthusiasm of fans. Another ostracized conservative, Hispanic author Jon Del Arroz, launched a superhero series called Flying Sparks.

Meyer, too, responded to the taunt from pros that he couldn’t do better. He launched his own crowdfunded series, Jawbreakers: Lost Souls, signing a publishing contract with the small company Antarctic Press. Yet industry insiders refused to play fair. Marvel pro Mark Waid contacted Antarctic, portraying Meyer as an evil bigot and persuading them to cancel the contract. In response, Meyer started his own publishing company but is also suing Waid for defamation and inducing breach of contract.

Though many fans rejected politics in comics, others wanted a broader range of views. Maverick sci-fi writer Vox Day launched a series called Alt*Hero featuring anti-government storylines. This caused friction with creators like Meyer and Van Sciver who don’t want their brands associated with Day’s controversial views. Yet many fans embraced them all. Every time one of these creators launches a campaign on crowd-funding platforms like Indiegogo, they achieve many multiples of their monetary goals. (Full disclosure: I have personally made small contributions to four of these projects.)

Unsurprisingly, the corporate media continues its one-sided coverage of Comicsgate. They echo the accusations of industry pros that Comicsgaters were sexists and white supremacists, much as they demonized disgruntled gamers during the Gamergate controversy of 2014. Their evidence of bigotry is to cite “harassment” of comic industry pros by “fans,” mostly anonymous trolls, ignoring the fact that Meyer and other Comicsgate figures have repeatedly called for civility from their supporters. Comicsgaters also receive online insults and threats, but these don’t count. The corporate media prefers to portray complex issues as simple morality tales of good versus evil.

Is Comicsgate a hate-filled backlash against diverse creators and characters, or is it a fan revolt against substandard products and ideological conformity? Check out channels like Diversity & Comics and Van Sciver’s ComicArtistPro Secrets and decide for yourself. 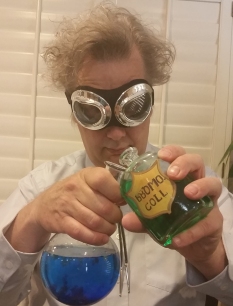 Vaughn Treude grew up on a farm in North Dakota where the isolation of his home made books a welcome escape. He has been reading sci-fi as long as he can remember. In 2012, he published his first novel, Centrifugal Force. Since then he has concentrated on steampunk, writing Fidelio’s Automata and co-authoring the “Ione D.” series with Arlys Holloway. See Vaughn’s blog at steampunkdesperado.com.

2 Responses to The Truth About Comicsgate