Octopus: Chameleon of the Sea?

Octopus: Chameleon of the Sea?

because most people find this wonderful creature’s weird appearance and behavior hard to believe. We’re all acquainted with the short version of an octopus description: rounded bodies, bulging eyes, and eight long arms. I prefer to gravitate toward the lesser-known fun facts about these “monsters of the deep.”

To begin with, scientists consider octopuses the most intelligent of all invertebrates. They are especially clever at escaping and disguising themselves, and can even use tools to achieve this agenda. The behavior of using tools is usually seen in more highly evolved animals like mammals, but a veined octopus (sometimes called a coconut octopus) can find and drag around an empty half of a clamshell until they find a matching one, flip it over on top, and hide between the two halves like a clam. If they can’t find clamshells, they use empty coconut shells cut in half and discarded by humans on the ocean floor of shallow bays. Besides being brilliant at hiding, they’re also great escape artists. Their bodies are so squishy that they can squeeze through a tiny crack, as long as it’s big enough to accommodate their beak, the only hard part on their bodies.

In April 2016, the world cheered for Inky, an intrepid octopus at the National Aquarium of New Zealand.  One night his tank lid was accidently left slightly open. Inky made the international news with his daring dive for freedom. He slithered out of his enclosure, dropped to the floor, and scooted across to a small drainpipe. He then wedged himself in and down 164 feet to the sea.

Another fun get-away method for the octopus is to expel water forcefully through a muscular tube called a syphon, which causes the animal to rocket off in the opposite direction while excreting a dark liquid to muddy the water so predators can’t see it go. One of the scientists I researched for this post described this phenomenon as “farting ink.”

The camouflage strategy is ingenious. An octopus can change to gray, brown, pink, blue, or green to blend in with its surroundings, or change color and texture to mimic another animal. They use this trick when approached by a predator, even contorting their arms to form a particular shape. Researchers have documented an octopus threatened by a predatory damselfish transforming to mimic the damselfish’s enemy, the sea snake.

The disguise shenanigans get even wackier. Male octopuses have one arm called a hectocotylus that contains sperm packets and acts as a penis. When not being used for reproduction, it acts like a regular arm. Sometimes the disguise hilarity ensues when a male tucks his offending appendage up and out of sight so he looks like a female. He then sneaks into an underwater crevice or hideout occupied by a real female and a protecting rival male. The plan is to whip out the hectocotylus, impregnate the female, and beat a hasty retreat before anybody suspects anything. Predictably, this venture sometimes ends badly, but I still applaud the chutzpah.

Another weird and wonderful defense method is employed by “blanket octopuses,” named thusly because they have a web on each side, between their arms, that looks like a blanket. Blanket octopuses are immune to the sting of the Portuguese man-of-war, but when they encounter one, they yank off its tentacles and brandish them like light sabers to fight off other predators.

The situation gets really bizarre in the life of blanket octopuses when it comes to mating. Considered the quintessential odd couple of the undersea world, the males are the size of a walnut, about one inch long, while some of the females are a whopping six feet long and weigh up to 40,000 times the weight of the males. This is one of most extreme examples of dimorphism (differences between males and females) in the animal kingdom. For safe sex, this male prefers to mate from a distance. The tiny guy just detaches his hectocotylus and hands it over. The female tucks it into her mantle cavity for storage until she’s damn good and ready to have offspring. Then she retrieves it and spreads the sperm out over her bundle of up to 100,000 eggs.

I usually end my Amazing Animals Blog with some pearls of wisdom about how we can adapt and assimilate some part of the featured creature’s behavior into our own habits, to become more efficient or creative. I call it reverse anthropomorphism. However, the lifestyle of today’s subject defies suggestions on copying. Except maybe the part about slithering away down a drainpipe and escaping whatever in your life is constraining you, and thwarting your freedom and joy. Also, the part about safe sex.

Check out this astounding giant octopus at the Monterey Bay Aquarium. 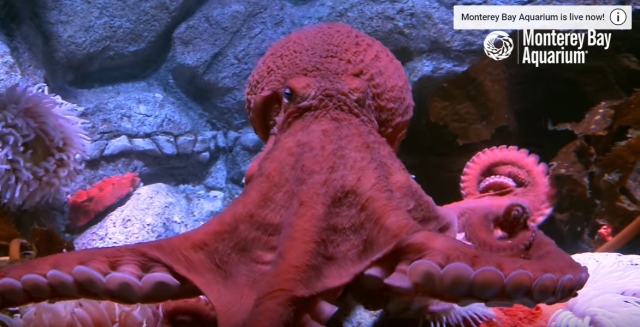 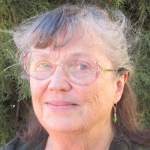